Music In Our Schools Tour 2014 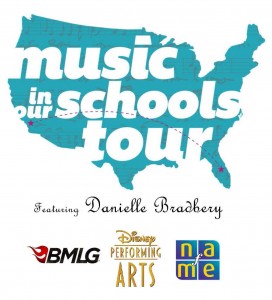 In March 2014, Give a Note partnered with these outstanding organizations to celebrate Music In Our Schools Month with the Music In Our Schools Tour. The Tour started at Disneyland Resort in Anaheim, California and traveled to five schools along a cross country route. At each school, we celebrated the importance of music with a student performing group concert, a performance by Danielle Bradbery, and presentation of a grant and Disney “Mousecar” award. The tour concluded at the Walt Disney World Resort in Florida with a concert at Disney Youth Program’s Festival Disney celebration!