Our initiatives have provided more than $1.4 million dollars in direct funding to school music programs. With our focus on raising awareness to the importance of music education, we are making it more accessible for students everywhere. 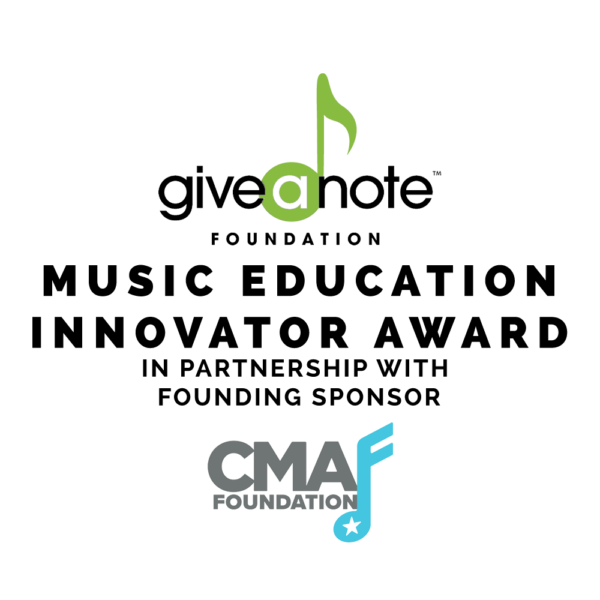 Thanks to our founding partner, the CMA Foundation, Give A Note (GAN) awards public school music teachers who implement innovative curriculum in their classrooms, designed around their students' needs in the music classroom. GAN hosts this award once a year. Find out more about past winners and how to apply! 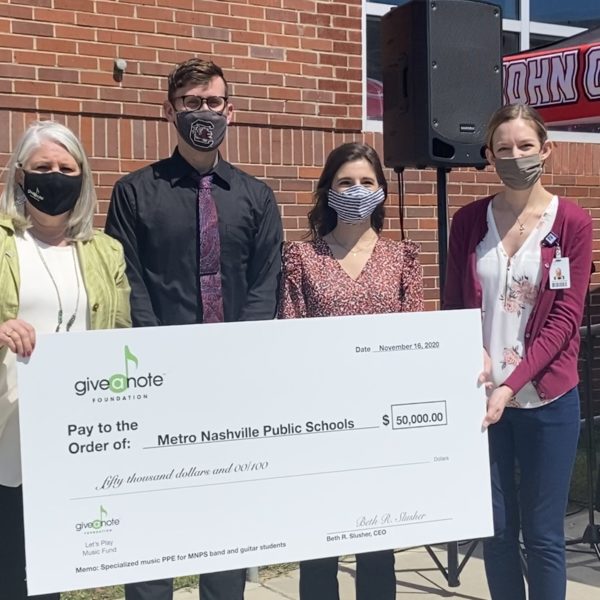 Give A Note established the Let’s Play Music Fund in cooperation with our partners at Southeastern Performance Apparel, the National Educational Music Co., and Practicing Musician to provide The Instrument Mask™, Voice Mask™ and protective bell covers to K-12 public school music programs in need.

The CMA foundation granted $150,000 to Give a Note Foundation to study music education access across the United States. This study gathers valuable information through personal interviews with stakeholders and surveys of music educators. The final study report will be presented in February 2017.

Glee Give a Note

In October 2011, the Give a Note Foundation, 20th Century Fox Home Entertainment, and the TV show Glee launched a social media campaign to raise awareness about the importance of music education. Through an online video contest, we garnered more than 1 million votes, 250,000 Facebook impressions, and were able to award over $1 million in grants to 73 schools.

Music In Our Schools

In partnership with Radio Disney, Music In Our Schools was a concert tour that featured prominent music programs across the country. Each March for Music In Our Schools month, six schools win a stop on the cross-country tour, where they were awarded with a Give a Note grant and a community concert featuring a popular band or artist.

To celebrate the Music In Our Schools Tour 2014, we joined Disney Youth Programs, Big Machine Label and Danielle Bradbery to celebrate music education across the country. Starting at Disneyland in California, we held events with student performances, concerts by Danielle Bradbery, gifts of grants, and Disney “Mousecar” awards at each school. The tour finished at Walt Disney World with a concert at Disney Youth Program’s Festival Disney celebration.

For the DVD release of Shrek, the Musical, we partnered with DreamWorks Animation and 20th Century Fox Home Entertainment to create three Shrek posters in support of music education. With an online poll, parents and students were asked to vote for their favorite poster and enter their school to win a $10,000 Shrek grant. As a result, five schools were awarded $10,000 grants and the winning poster decorated music classrooms throughout the country.

As Education Ambassadors for Jupiter Band Instruments, the Boston Brass Band travels throughout the United States entertaining audiences and sharing the story of Give a Note Foundation. In 2013, Boston Brass embraced Give a Note and music education as their cause. At each concert, they “passed the hat” and raised $6,000.

To recognize the special music teachers of the world, 21st Century Fox and Give a Note created the MusicEd Idol program. Following the legacy of Fox’s American Idol, MusicEd Idol empowered millions of students to nominate a music teacher who made a difference in their lives. We received more than 100 video nominations and 20 schools were awarded grants. Five special music educators were then selected to attend the 2016 NAfME National In-Service Conference in honor of their recognition.

To commemorate the finale of the television show, Glee, in June 2015, 21st Century Fox partnered with us to award 16 schools with grants for their music programs. Together, our affiliates visited the schools around the country to present the grants and celebrate their music teachers, programs, and communities.

In honor of Music In Our Schools Month 2015 and 2016, SheetMusicPlus offered discounts on sheet music and donated a portion of each sale to the foundation’s mission. Through this effort, SheetMusicPlus has donated more than $2,000 to support music education.

In celebration of Glee’s 500th song, “Shout,” a portion of iTunes downloads were donated to Give a Note Foundation. The foundation received more than $18,000 through this simple campaign.

Rivars, a manufacturer of custom choral and ensemble attire, pledged their support by supplying a limited edition Give a Note t-shirt to each donor who gave $25 or more. The program has helped raise more than $3,000.

In cooperation with the National Association for Music Education, this program awarded professional development scholarships as a result of Ostinato annual giving contributions.

From 2013–2014, we partnered with Music & Arts to host Pledge to Practice, a campaign to raise awareness and encourage students to practice their music. We challenged students to practice a pledged number of hours during Music In Our Schools Month, and when they met their goal a donation was made to the foundation. Pledge to Practice resulted in thousands of hours of student practice and $15,000 in donations.

Learn how you can partner with us to feature your brand and support music education.